My deepest condolences to George Floyd and his family on his passing.
And I hope that the world will be free of all kinds of discrimination and violence.

The Murder of George Floyd 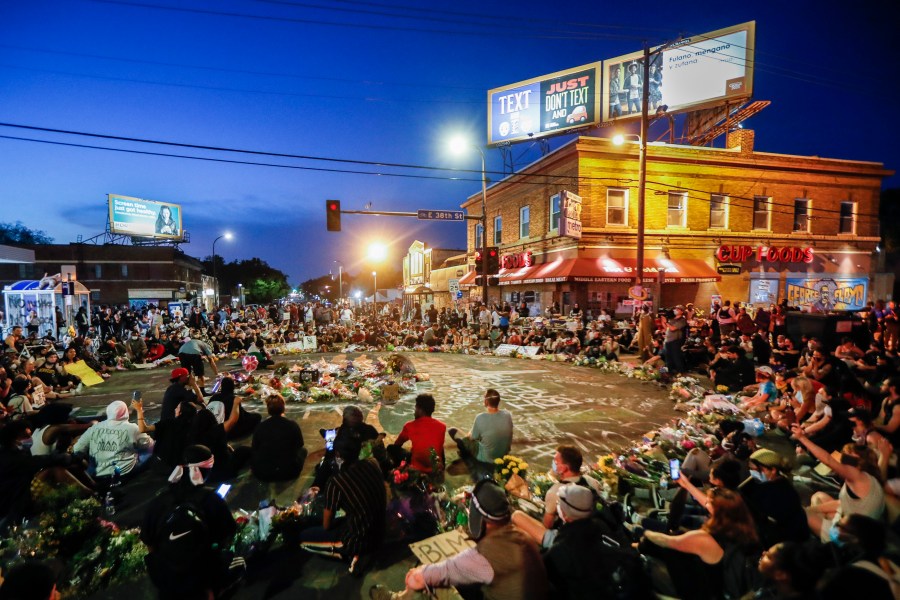 Protesters gather at a memorial for George Floyd where he died outside Cup Foods on East 38th Street and Chicago Avenue, Monday, June 1, 2020, in Minneapolis. Protests continued following the death of Floyd, who died after being restrained by Minneapolis police officers on May 25. Link: FOX59 (AP Photo/John Minchillo)

George Floyd was arrested on May 25, 2020, at a grocery store in the Powderhorn Park area of ​​Minneapolis, Minnesota for using counterfeit $20 bills.
After that, George Floyd, who was handcuffed in the backhand and was already unable to resist, killed white police officer Derek Chauvin by pressing his knee against George Floyd’s neck nearly nine minutes (8 minutes and 46 seconds) during his arrest.

Following Floyd’s death, protests against the excessive use of force by police officers against black suspects and the lack of police accountability spread across the country.
The day after his death, protests began in Minneapolis and spread to all 50 US states and more than 400 cities outside the US.

Full video of the surveillance camera just before George Floyd was killed by white police officer Derek Chauvin. (There are no scenes of violence here.)

Probably a video released by the Minneapolis Police Department. (There are no scenes of violence here.)

Various people discussed the inconsistencies in this video.

The main body of this demonstration activity is Black Lives Matter (BLM), which is the catchphrase of this demonstration. It protests police atrocities and conducts organized social movements dedicated to non-violent civil disobedience, with over 30 locations worldwide.

Black lives matter, and of course everyone’s lives matters, but don’t overlook the inexplicable fact that it’s happening at the same time

Taking advantage of Black Lives Matter (BLM) demonstrations and protests on SNS, etc., various organizations and groups have their own intentions to mob these protests or control the purpose of the protest.
Each should be aware that your conscience of protesting police discrimination and violence will be used for other purposes.

I spent about three days watching articles and videos as much as possible on my various questions. I have come to the conclusion that it is not a simple structure in which only Antifa is evil, but that the various things that I describe below are intricately intertwined and may have been carefully planned.

I’ve pasted in a link to the source whenever possible.
Don’t put a lid on your own doubts.

Because it is important, please think for yourself without an emotional reaction in SNS, etc. easily.
Like Amazon’s recommendation function, major search sites and SNS can not deny the possibility of promoting your interest and thought in a certain direction.

Also, I don’t dare to include what George Floyd was like, etc. If you are interested, please check it out for yourself. This is because living a normal life not only in the United States but around the world is a difficult situation for most people regardless of race, and there is no difference that each person is desperate to live.

It is also true that there are many doubts about who the white police officer, Derek Chauvin, who killed George Floyd, is a crisis actor.
I couldn’t finally determine the information on this, so please search for it yourself.

What I know is that they worked as security guards at a nightclub called El Nuevo Rodeo club in Minneapolis, and they knew each other.

The Obama Foundation has tweeted a poster of George Floyd, who was killed by a police officer in Minneapolis on May 25, 2020, from the Foundation’s Twitter account on May 17, 2020. Currently, it has been deleted and cannot be confirmed from Twitter, so please refer to the remaining video.

Why did the Obama Foundation act as if they knew in advance that George Floyd had been killed by a police officer and that it would turn into a major social problem?

There is a fact check that this Tweet was fake, but I have doubts about the claim itself.

What is the source of funding for mobilization and sabotage by Antifa?

Antifa is an anti-fascist organization, which is carrying out radical activities with its logos and flags, but the reality is not clear. There are many opinions on the Internet that George Soros, who is trying to advance the one world unification government with the idea of authoritarian fascism, is the source of funding.
It seems that he is aiming for a world like the current Chinese Communist Party’s ruling system.

In this demo, members of Antifa also demonstrated to George Soros to pay the wages they attended.

Antifa is increasingly working to divide Americans in this demonstration.

In addition, piles of bricks that could be used for destructive activities are placed near demonstration sites around the United States, and it is thought that this is also due to Antifa.

Fox News, America’s leading media, has forged a news photo of the Capitol Hill Autonomous Zone (CHAZ), an area occupied by protesters in Seattle.
MSM (mainstream media) is also full of fakes, such as a scene from a movie that shows the city’s destruction.

This seems to have been intended to make black lives matter (BLM) demos more radical.

As many people may already know, it may be time to get rid of the illusion that the mainstream media (MSM) is only telling the truth.

Can you understand “Unrestricted Warfare” of the Communist Party of China?

The Communist Party of China has a strategy called “Unrestricted Warfare“.
The idea is “unlimited war”, “a war that goes beyond all (human) limits.”

Such wars are not limited to China, but are characteristic of wars in the era of globalization, and the boundary between military and non-military people is also ambiguous.

Based on this idea, the Chinese Communist Party is believed to be using the Black Lives Matter (BLM) demonstration to promote division and civil war in the United States and prevent President Trump from re-election.
It seems that work has already been done on all kinds of organizations and groups such as major American media, SNS, the American Democratic Party, and Antifa. (Acquisition, intimidation, funding, etc.)
The situation is more serious, and certainly not the only Communist Party agents lurking in Black Lives Matter (BLM) demonstrations.

What should you, we, US aim for?

In particular, the choice of Americans in the future will definitely change not only the United States but the world. This is because, in effect, there is still a reality that American choices are being rolled out globally in other countries.
I still hope that what seems like good or right at first glance is cleverly manipulated and doesn’t produce demonic results. There is also a saying that “evil is born from good”.

I believe that this history of discrimination and domination is the very karma created by the repeated “Fear” of thousands of years of human history.
The aggression created by “Fear” of being different.
“Fear” that you do not want to be disadvantageous in order to survive.
“Fear” does not want to lose their wealth.
And a demonic technique that uses that “Fear” to control people.

Instead of getting these things better over the thousands of years, isn’t it modern that viciousness has reached a more sophisticated point?

It has reached a point where each of us is forced to think about what and who it is that has pulled us to such a place.

And isn’t it time to enter an era where “Fear” needs to be sublimated into warm solidarity and love for others, not anger?

I started this blog believing in the possibility that various events, "dots" and "lines", could be connected and that some form of truth could emerge.
I think we have entered an era in which truth hidden in all fields, such as politics, economics, technology, art, philosophy, and religion, comes to light and creates new value.
Personally, I love music.

More about this blog